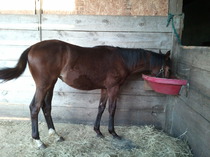 Seal brown, or just brown, is a genetically separate color from bay or black. The color is called "black and tan" in some countries, which is an apt description. The typical appearance is that of a black horse with tan highlights in specific areas -- the muzzle, flanks, underbelly, and girth areas. The darkest shades of seal brown would be almost all black except for a little tan at the muzzle and flank, while the lighter ones look like a sooty bay.  Although different genetically, the phenotypes overlap, meaning that some bays are darker than some browns, so the only way to tell for absolutely certain which color you have is by genetic testing.

At one time a theory was proposed that seal brown was caused by a solid black base color with a 'pangare' gene, however, this theory was disproved when the 'a' allele was isolated and a test for it developed -- since none of the seal browns turned out to be aa, they could not be "black plus" anything.  This old disproved theory is only mentioned because you might come across it in older books and websites.

Most labs only test for the 'a' allele, and anything else is labeled "A" by default, so browns will appear as "AA" or "Aa" on that test; however this does not mean they have an actual "A" agouti allele.  Only one lab so far, PetDNA of AZ, can test for the "At" allele (this is a separate test).

All photos © by photographer and are used with permission.


If you'd like to have your horse's picture considered for use as an example on this site, you may submit it to us as an email attachment.